🔮Get your 2023 Entrepreneur Horoscope here! 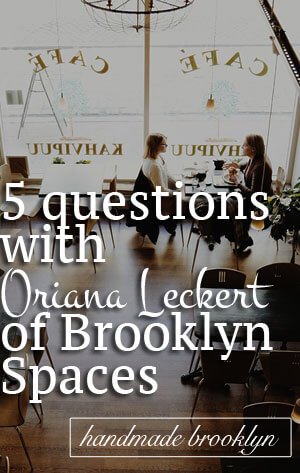 I first met Oriana…jesus, almost 5 years ago? She was just beginning her brilliant blog Brooklyn Spaces and came to my apartment to interview me about MSC (The interview is here). I am so happy to say that after years of hard work and building a brand, Oriana was able to publish her first book about her project: Brooklyn Spaces: 50 Hubs of Culture and Creativity

. It features 50 awesome spaces all around our borough. I’m so honored to have such a wonderful, sweet, and kind person as the first in this series of interviews with female entrepreneurs.
1. What made you decide that you needed to create your brand (Or less entrepreneurially: what made you feel the need to get BK spaces out into the public eye?)

This project started out of a sense of historical preservation—making sure a record of these fascinating spaces would exist for the future. But as my audience began to grow, I realized I had an opportunity to be helpful to the people and places I was profiling in the present, too, by promoting their events, sharing their stories, signal-boosting their calls for participation and submissions and funding, etc. A rising tide lifts all boats, and it was clear that the wider my reach, the better I’d be at contributing to keep these vibrant places alive. 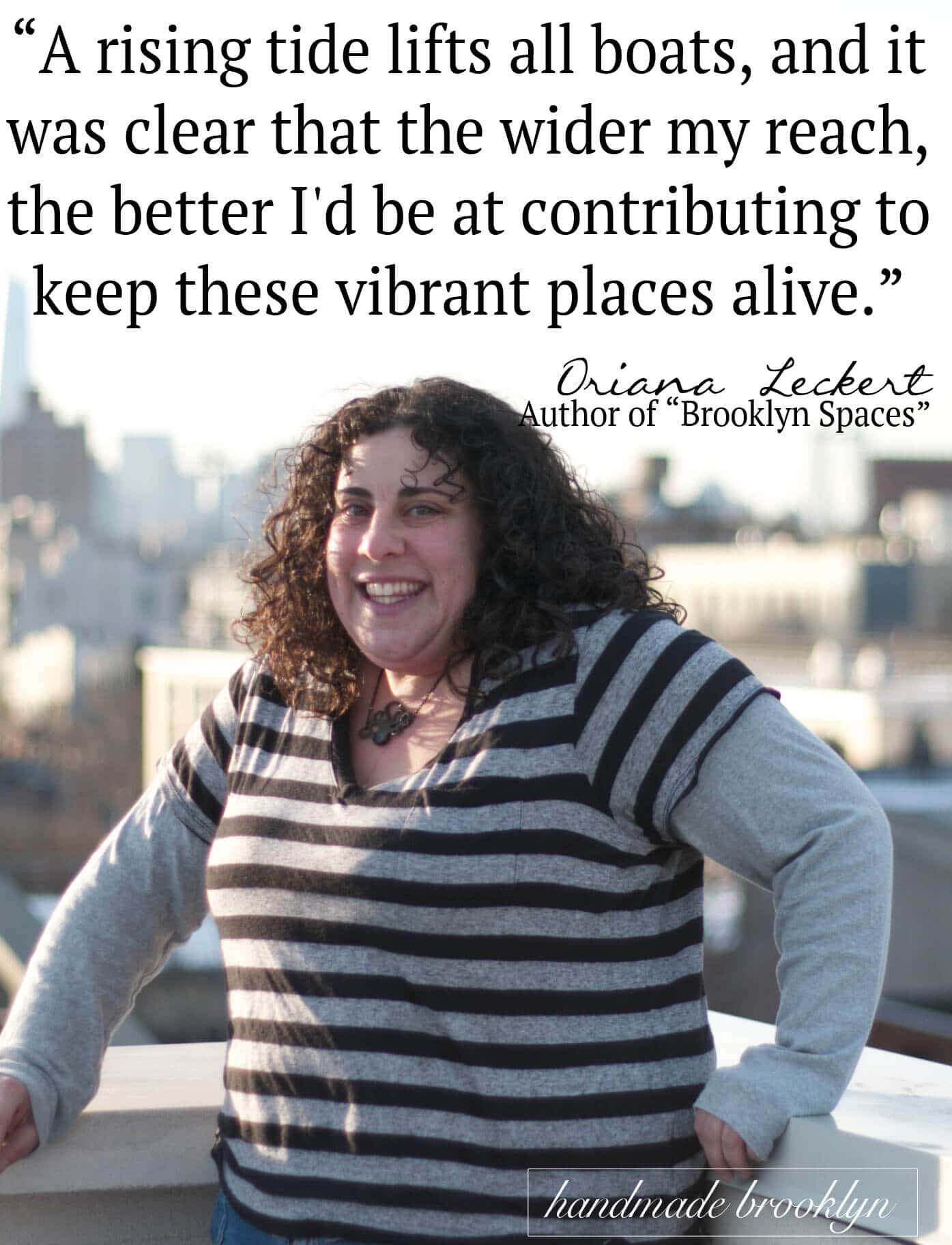 2. When did you think to yourself “okay, this is definitely viable?”
Well, if you mean “viable” as “makes enough money to support itself / me,” the answer is never, as this will probably never be a profitable endeavor. But if you mean it in the sense of “sustainable as a long-term project,” I’d place that a few months in when I started getting a decent social media following and some very nice press from folks like Motherboard, FreeWilliamsburg, and Laughing Squid. That’s when I thought, “Yeah, people are into this, I should keep doing it.”
3. What’s a surprising challenge that you didn’t know you’d encounter along the way?
When I signed a book contract, I knew I was going to be on a very tight schedule: I had less than three months to write the whole thing. I figured, I’ve been a freelancer for years, I know how to push myself to meet insane deadlines. But I hadn’t counted on the logistics of a project like this, which required scheduling about 50 interviews and 75 visits to spaces for events during that time. It’s one thing to force myself to go without sleep or jump through crazy hoops to finish something, but it was quite another to find ways to get other people to be available and doing things during my insane timeframe.
4. How important was social media in your success? Do you think you would have been as successful without the advent of social media?
It was and is absolutely crucial, and no, no way would I have been able to succeed without it. This project depends almost entirely on other people reading what I write—that was how I was able to grow my audience and, ultimately, land a book deal. Social media allowed my audience to be visible, as in, “I have xx dedicated fans, therefore this is a viable project with a real reach.”
5. What is something someone outside of your industry might not realize about the work you do?
I think the general timelines of publishing are not really known to most people, and the fact is that traditional publishing take a long time. So even though I turned in my manuscript last August, the books weren’t on shelves until this May. Meaning that, especially with a book like mine, it might seem a bit out of date, even just a few months later. That’s why I’ve been careful to be as clear as possible about this being a snapshot of a fixed moment in time.

About the book:
Brooklyn Spaces: 50 Hubs of Culture and Creativity

presents a cross-section of underground, DIY, and culturally innovative places across the borough. It showcases 50 spaces that have been repurposed and reimagined, which now serve as community hubs for artists, performers, makers, and creators of all stripes. They include a former cannonball factory turned multimedia arts space in Gowanus, an anarchist intentional community in Bed-Stuy, and an experimental gin distillery in a Sunset Park manufacturing center that dates back to the Industrial Revolution—just to name a few. The stories of each space is told through interviews with the creators, as well as hundreds of pictures by prominent Brooklyn photographers.
Previous Article

5 (Free!) Wordpress Plugins You Need to Use

🔮 Get Your 2023 Entrepreneur Horoscope!