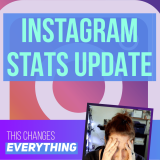 [00:00:00.760]
Hey, guys. Megan here. Welcome to my office. It’s typically not the place I like to record videos because of the aquariums behind me that you probably see and more over here. They give a lot of background noise and also the lighting in here. [00:00:17.310]
It’s just really not a good replace to record video. But I’m kind of in a bind right now because my mics that I usually use have been sent for repair. And I want to actually do a video about that later on because the service that I’ve gotten from DJI to get this all fixed has been phenomenal despite needing it. Anyways, let’s get into what we’re talking about today. [00:00:44.850]
I wanted to share with you this really interesting report I got on the current state of Instagram for professional accounts like yours. If you’re using Instagram for your business, then you know that it’s, one, a huge time buck, and two, it’s just a really saturated area for social media marketing. And so I think the more information you have that equips you to understand your audience and how to utilize it and how to work with the algorithm, the better off you’re going to be. So that’s why I wanted to film this despite the situation. [00:01:26.740]
So I got this report from Metricool, and if you’ve seen my other videos before, you know that I’m a big fan of theirs. I use their app for social media scheduling, but also for analytics. And they also have a built in smart link section, which is an Instagram landing page or social media landing page that you can put different links and things. And so I’m a big fan of theirs. I am an affiliate of theirs. [00:01:51.660]
But you can get this information all for free on their website, and I will link to it below. I will also link to my affiliate link so you can get a free trial if you want to check it out and see all the things that Metricool can do. But anyways, let’s get to the report. So let’s talk about the data points first, because I feel like that’s always a really critical thing to understand. They analyzed over 1850 professional Instagram accounts, but not personal ones that were set up for business. [00:02:19.020]
They looked at over one 8 million feed posts. So the carousel, single images, videos, anything that’s in the feed, six, 7 million stories and 2790 Reels. And this is the data they found. First, content. Let’s talk about content. [00:02:37.900]
I feel like that’s the most critical factor. Everything else can kind of be like tweaks or things to your advantage, but you really need to know what’s going to be the best bang for your buck. Unfortunately, we have to start off with bad news. There is a reduction in reach for both stories and posts in the feed. Average reduction for reach in stories has been a decrease of 7.49% feed posts. [00:03:05.080]
And this is a reduction from 2021 feed posts is a reduction of 22.35%. So nearly a quarter down in reach for feed post, which is not great. However, it’s not all bad news in that because the feed is still so critical, I think that it’s really the part of, you know, it’s the first thing people most likely see when they come to your profile. They don’t really check out stories or reels right away. That sort of gets further into the know, like and trust funnel. [00:03:38.370]
Right? But I think that your feed is still a critical thing that you should focus on despite its lower reach. And the reason is carousels. Metricool found that carousels achieved 25 71% more reach than single pictures or even videos in the feed. Now, you know, video marketing is always just like the creme de la creme. [00:04:02.610]

it’s what everyone always talks about. But it’s interesting to see that not even engagement, but reach carousels go further than video. That’s so interesting to me. And by the way, IGTV just isn’t here. So I think we should all just pretend that it never existed, because it seems like Instagram Reels that way, too.

[00:04:24.940]
What they found with Reels, though, is that Reels get two to twelve times more reach than any type of post in the feed. So if you haven’t been doing Reels yet, they really want to compete with TikTok stories. Yeah, they kind of care about stories, but they’ve beat Snapchat, so now what they’re focusing on is Reels. And if they can beat TikTok through Reels, they’re gonna do it. Which is why right now it’s so critical that you focus on including Real in your social media strategy, because it can reach two to twelve times more people than a regular feed post. [00:05:07.060]
Now, let’s talk, let’s dive a little bit more into that and talk about what kind of content to post specifically. Now, it’s interesting, and like I said, I’ll link in below so you can get the full data set. But what was interesting to me is that they targeted in this study small accounts, which I think is great, and we’ll get into that in a little bit later. They looked at a variety of accounts, but most surprising information was for small accounts. And for this study, small accounts were seen as an account with zero to 500 followers. [00:05:42.540]
And if you are one of those accounts that has under 500 followers, you’re in luck. Metricool found that the reach of Reels and I’m gonna read this, “the reach of Reels is 1218 times higher than posts in the feed, a 1200 time boost for Reels if you have a small account.” That’s how much they want this reels to work as a competitor to Tik tok so Reels get into it. Now, for the rest of it, the order that they recommend based on the study is Reels, Carousels stories and then Feed Posts, and that is in terms of reach for accounts of any size. Now, let’s talk about how much should you be posting? [00:06:31.600]
What’s surprising is a lot of generally accepted knowledge is that it’s about quality of posts over quantity, right? That generally makes sense. Not in this study. What they found is that the greater number of posts published, the greater number of followers. Which kind of sucks, right? [00:06:51.640]
If you’re posting all of this, like, really good content and you’re doing a hell of a job and all of these things, you might get beat by somebody just posting a bunch of memes. They found that with Instagram, it is about quantity instead of quality. So let me break down the average number of posts they found for the feed section. Accounts with zero to 2000 followers averaged about three posts per week. Accounts 2,000 to 10,000 followers four times a week. [00:07:20.980]
10,000 to 50,000 followers five times a week. This is the crazy part. Ready? And this is for the feed. Accounts with 50,000 to 45 million followers posted an average of eleven times per week on the feed. [00:07:37.090]
For stories, it gets even crazier. Accounts zero to 500 followers four times per week. 500 to 2000 followers eight times per week. 2000 to 10,000 followers, 15 times per week. 10,000 to 50,000 followers 26 times per week. [00:07:56.770]
50,000 to 45 million followers, 41 times per week. Which is insane, right? Who is posting 41 times per week? Guess they’re probably using a schedule like Metricool or Plann because, oh my God, that’s like eight times a day, five days a week. That’s a lot, right? [00:08:24.410]
If you want that kind of growth, you gotta go for it, I guess. But wow. Just understand statistically

what you’re going to be up against. Now, Reels, this one is kind of interesting because despite Reels being so popular, algorithm wise, it’s not a lot of content. Accounts zero to 10,000 followers, only posted an average of 1 Reel per week.

Is Dropbox Shop Better Than Etsy to Sell Digital Products?

Did you know Pinterest could do this? I had no idea!

How to Create Multiple Streams of Income as a Blogger

The best social media apps for your small biz

How to Be Popular on Instagram and Grow Your Business

Is Dropbox Shop Better Than Etsy to Sell Digital Products?