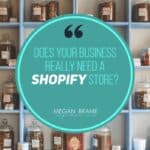 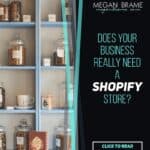 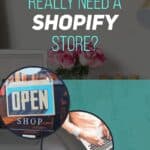 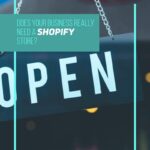 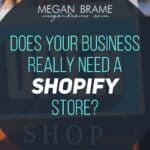 I know the title of this blog post sounds like a sales pitch, but I couldn’t think of a better way to put it so just go with it. You know I’m a huge fan of Shopify, but I’m also aware that it’s not for everyone and it can be a big cost if you’re not utilizing it correctly.

So rather than sell you on the merits of what Shopify does, let’s talk about if those merits are actually in your favor or if your business is better somewhere else.

Things to Consider Before Opening a Shopify Store

Shopify is numero uno because of the options it provides to e-commerce entrepreneurs who want to develop a system that isn’t beholden to the whims of a third-party Board of Directors (Caveat: I know Shopify has a Board, but when you put them up against the major changes platforms like Etsy has made to force sellers into compulsory advertising fees, you can see the difference). If you want to have the ability to run your shop as you see, then Shopify is right for you. If you’d rather leave the nitty-gritty up to someone else, then go for a third party platform.

As I mentioned, Etsy now requires sellers to participate in their advertising campaigns on Google for a compulsory 12% (the 12% is for sellers who have sold over $10,000. Those who are under $10k aren’t required to advertise, but if they do they’re charged a 15% fee). In addition, Etsy and eBay both promote other sellers products on your listing pages, thereby adding to the pool of potential sales (and commissions) they provide the platform, not you. If you want to be able to promote your own products with your own budget, then opening a Shopify is a better bet for you.

Shopify says that you can sell nearly any product on their platform, and that’s true, but I would say that a big consideration is the cost and delivery of your product. I don’t think a full Shopify store is a good solution for, say, $1 printable (unless you’re selling dozens a day). For something like that, I’d recommend a third-party site like CreativeMarket or utilizing Shopify’s “buy button” feature which is way cheaper. I’d also recommend using a different service if you’re offering digital courses since it can be difficult to set up a link between Shopify and a course delivery platform. It would probably be easier to just use built-in payment processors on course delivery apps like Teachable or WP Member.

I’ve hinted at this a few times, but essentially it boils down to: Do you want to control how your business is run, or is this something you’d let others handle? To me, I see having your own platform as a way to have complete control over your business. You are the one who has the contact information of your customers, or the one who handles return policies, or who can run sales. To be totally fair, though, there’s a lot of things that it can be nice for these third-party platforms to handle, like sales tax collections for example. But to me, if you’re serious about growing your business into something big, then you’re going to want a system that doesn’t make you beholden to the terms which ultimately benefit the Platform, not the seller.

Newsletters, social media, customer feedback, it can be hard to run any of these things on something like Etsy or eBay. eBay stores have the ability to let customers sign up for newsletter subscriptions, but did you even know that? I have an eBay store and I’ve never used that feature because (to me) that’s not the right platform for engaging customers. At least with a Shopify store, you’re able to have your own little ecosystem that allows you the ability to create repeat customers easier than it is on third-party platforms. However, if this is just a side gig for you, then that might be way more than you care to do so opening a Shopify store might not be the best for your business.

If you want to dive into Shopify, I have an entire guidebook that you can download here OR you can get for free! Click the link to find out how.

Ready to start? Click here to use my affiliate link and get a free trial of Shopify.

How to Increase Your Productivity Without Going Insane

A Guide to Dropshipping on Shopify

how to grow your biz without offering discounts

how to grow your email: 2022 guide with tactics that work

Which social media platform is best for your business?

How to Increase Your Productivity Without Going Insane