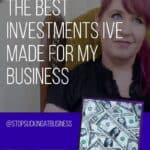 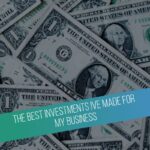 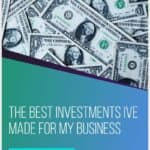 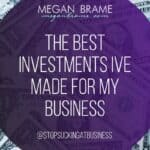 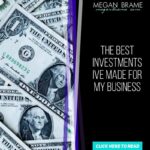 I think it gets difficult to figure out what to invest in when you want to grow a business. There are SO many options out there. It’s really easy to feel overwhelmed or to get FOMO and blow money on stuff you never use.

So let me show you the things I’ve spent money on that were good for my business, and what made me pull the trigger:

The Best Money I’ve Spent on My Business

Yeah, I know I’m a Coach so you think I’m biased. But I was paying for 1:1 coaching long before I ever had an inkling to do it on my own. There are a ton of coaches out there, and I found my first one on Noomi. I do best with a Coach who tells me what to do. Rather than one who just asks questions so that I figure it out on my own. Consequently, those Coaches tend to be more expensive. But I see it as paying a toll so that I don’t have to take the scenic route. You’re going to tell me how to accomplish this task so I don’t have to figure it out on my own? Do you accept American Express?

I’m part of 2 paid masterminds right now. One is small, about 10 women, who are in varying stages of their business growth. The other is a paid Facebook group that’s attached to a membership site that’s much bigger and has a huge variety of business owners. I pay for both because they serve different areas for me: the smaller one is more intimate so I’m able to get advice quickly and have more 1:1 time in the monthly calls. The larger group because it’s a huge networking opportunity that has helped me immensely. I’ve gotten so many podcast guests there, and have collaborated with a bunch of other entrepreneurs! Also, it’s great to have a broad perspective on a situation from so many people who see it through different lenses.

I’ve talked about my love of apps before, so it goes without saying that they would be on my list. I’m a huge nerd for tools that can save me time and energy. And if that means putting down a yearly fee to free up my time, then let’s do it! My favorite are schedulers for Instagram and Pinterest, TubeBuddy, Quickbooks Self-Employed. And apps that run the backend of my blogs, like ShortPixel and TastyPins.

I’ve tried to cobble together automation funnels on free services, and the difference between free and paid is unbeatable. The ability to drag and drop funnel paths, add conditions, update triggers…it’s just so worth the price. Right now I’m using MailerLite since it’s been around a long time and makes email automation super easy to do. (You can also use something like ClickFunnels for even more funnel building if you’d rather focus on websites instead of emails)

Like apps, and maybe that’s weird to say, but investing in people who save ME time is a godsend. Currently, I have a web developer on retainer. A podcast editor who takes my raw podcast episodes and runs with it. And a VA who does weekly stat pulls and researches tasks for me.

Things I’ve spent money on that weren’t great? Embarrassingly, classes I bought and never used. I can’t even tell you the courses I have access to and never used. What a waste! Another one would be people who weren’t good fits. I started hiring as cheaply as I could to start. But now I realize that if I want the job done without oversight from me, I need to hire specialists (who are paid accordingly).

What about you? What’ve you invested in that grew your business?

Season 3 Episode 6: How to build a better app and learning to love MVPs with Patrick Bentley

How to Make Your Customers Ride-or-Die

What to look for in a group coaching package

How (and why!) to automate your business

WordPress Plugins I use for my blog

Law of Attraction Tips for Entrepreneurs

Season 3 Episode 6: How to build a better app and learning to love MVPs with Patrick Bentley